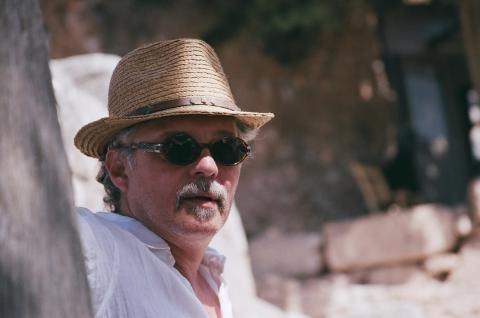 Stathis Gourgouris is a poet, essayist, translator and sound artist, who spends his life between New York and Athens. He works as a professor of Comparative Literature & Society at Columbia University.

It is absolutely true that he was born in Hollywood in 1958, but before he completed his first year on the spectacle set, the family, under tragic circumstances, returned to Athens, where he then grew up in the classic bourgeois neighborhood of Kypseli. Under tragic circumstances yet again, the family retreated once more to Santa Monica, CA, a total hippy beach town still in 1973, far beyond the Hollywood mogul hangout that it is today. This suspension between worlds, a kind of existential homelessness and pirate sense of adventure, remains the defining feature of his life to this day.

The ancestral roots of the Gourgouris family reside in Galaxidi, going back to the 18th century. In large part, initially it was a family of seafarers (ship builders, shipowners, captains, later naval officers) as was the glorious and wealthy artisanal tradition of the town in the mid-19th century. Next to the islands of Syros and Chios, Galaxidi was famous for its incomparable shipbuilding and splendid seafaring until the ugly aesthetics of the steamship gutted its wealth. But his namesake ancestor, Efstathios Gourgouris, was distinguished on land as a revolutionary commander in the Greek War of Independence, for which he was commended by Order of the Greek State in 1837. His great-uncle Nikolaos, a doctor by profession, was elected Member of Parliament during the Eleftherios Venizelos government in the 1920s. First cousin to his grandfather Elias was Dimitris Rondiris, the pioneering innovator in mid 20th-century theater in Greece. His paternal grandmother, Martha, came from the Hamodrakas family in Mani—her sister Galateia was the Director of the British controlled Power Company in Piraeus in the 1930s, a unique occasion of a woman corporate executive at that time. Her legendary life still has not been properly written. His maternal grandmother, Paraskevi Zaharopoulou, was the co-owner of Greece’s premier butter industry (Voutira Kerkyras) in the 1950s and belonged to the circle of the great bohemian musicians and singers of the era (Nikos Gounaris and Mihalis Sogioul). His older uncle Dimitrios was a co-founder of the Friends of Jazz Club in Athens in this same period, which met in G.P. Savvidis’s famous basement, and his younger uncle Stathis was the first to franchise Vespa in the United States. His love of motorcycles proved to be the cause of his tragic death at the age of 26, ten days before the Hollywood baby was born who thereby came to bear his name.

This fate precipitated the return of the traumatized family to Athens, and a happy home life growing up throughout the 1960s, military junta notwithstanding. Stathis wrote his first poem at the age of 9 in the dark while pretending to be asleep. The verses on the page were jagged. It was an epic poem of some 12 pages, written in perfect traditional 15-syllable rhyme, recounting the events of the Greek Revolution. Unfortunately, the manuscript was lost during the family’s next expatriation. His love for literature is owed to his mother’s endless supply of books from every literary tradition imaginable. Lost in the bliss of reading, the kid developed his sense of oblivion to what was going on around him, a capacity that proved very useful later in life.

During this time, alongside the flights of fantasy springing off the page, the young boy surrendered himself to music with unbounded passion. From his earliest sentient moments, he grew up steeped in jazz, as well as Afro-Cuban music and Brazilian bossa nova, courtesy of his uncle’s voluminous record library, without having a single idea of the African slave traditions that created this extraordinary music. When years later this truth was discovered, it resonated with added awe in what was already forever embedded in his psyche as pure sound. He knew Coltrane’s and Monk’s bands by heart in their various incarnations and recognized the different lineups by simply listening, which was made into a great performative source of amusement among his uncle’s jazz-fiend friends.

But, as a child of the times, he was equally awed and absorbed by rock music and hippy culture of the late 1960s, including his spending interminable hours with his ear glued to the radio dial trying to catch pirate stations during the junta for this reason. Coming from a bourgeois right-liberal family, his first sense of radical politics as a kid was rock ‘n roll counter-culture. Even after his earliest engagements with Marxist and anarchist thought post-junta, this particular dimension of radical rock aesthetics was never compromised. But also, courtesy of a teenage girl from Crete who lived at home under his mother’s tutelage, little boy Stathis was exposed to the heaviest laika and rebetika songs of the Greek folk tradition, which, in rather perverse fashion, he used to sing as lullabies in order to get to sleep at night. This was another source of adult amusement—this time for his mother’s hip bourgeois friends, who used to listen secretly behind the closed bedroom door.

The only thing he loved with passion equal to how he loved music and literature was football, which he played in the neighborhood’s famous Fokionos Negri St. since he was in first grade, much to his mother’s consternation. His passion for the sport has continued unabated and belongs to the same poetic sensibility that resides deep in the psychic core. The love of physicality that brought together mind and body in seamless pleasure was soon translated into competitive swimming in the great Olympiakos champion teams of the 1970s. In swimming, Stathis was definitely a sprinter—slow long-distance swimming he still treats with contempt. He was national champion in 100 m. butterfly and 200 m. individual medley and member of the Greek national team, all of which yielded his first international experiences, still as a kid, in West Germany, Luxembourg, and the Balkan countries then in full Soviet life. This early sense of wonder at being in the midst of foreign cultures, as well as competing to win and learning how to lose when being a favorite to win, were invaluable experiences that have served him well in the ruthless jungle he later entered as an adult professional.

His happy Athens life was further graced by impeccable schooling and stern but extraordinary teachers—their tough disciplinary measures were a sparkling prescient gift to this unruly child—as well as the most valuable thing of all: the gift of friendship, humanity’s most precious attribute. He was a member of the great class of Peiramatiko High School—the Experimental School of the Pedagogy Institute of the University of Athens—which graduated in 1976, yielding classmates of great achievement and ethos. In those days, one got into this top-class public school by examination in 6th grade. The process was rigorous and fair, and children from various social classes were our classmates. Stathis’ mother insisted on this public-school education, even though her children could have attended the famous Moraitis private school for free, given that the school’s initial founder, Karolos Berjian, by having married Rondiris’ sister, was his father’s uncle and all the Gourgouris boys had attended it back in the 1940s.

This process was interrupted suddenly one fine morning with news of mother’s severe illness. The protective net of happiness was shattered in an instant. This precipitated a rapid exodus from Athens and subsequent return to America in refugee-like conditions, at least in terms of what happened to everyone’s psyche. The flight from Peiramatiko to Santa Monica High School was as bizarre and alienating as it was eye-opening and miraculous. For a teenager to enter the world of California hippy life in the early ’70s had a paradisial quality, even in the midst of the family’s despair. Sex, drugs, and rock ‘n roll became literally the nourishment that ushered the teenager’s body and soul into the new path that later determined his adult life.

Stathis was fortunate to be surrounded by a group of very talented friends, loving, eccentric, and naïve, whose generally unorthodox behavior was both a source of inspiration and freedom from the doldrums of convention. Music was the galvanizing glue, a way of communicating, sharing, and learning each other’s souls, or simply hanging out without a clue: rock and pop music in its post-Beatles iterations, ‘60s psychedelia, Bowie glam, fetishized English prog, Zappa and Beefheart genius, experimental improvisation and noise, Henry Cow and Robert Wyatt, early minimalism, Sun Ra’s space gravitations of Black myth science, the warped imagination of The Residents, and, of course, punk and new wave from London to the most local LA bands in underground dives right in the heart of Hollywood.

All this was enhanced and complicated by psychotropic substances galore. Displacing the mind and shattering the ego became a regular way to alienate teenage alienation and achieve a sense of wonder for a world that proved inadequate at every turn. The intake of mind-altering substances, always with a disciplined attitude and respect as to their power, has remained an essential component in his way of life, much like his commitment to all sensual pleasures, exquisite culinary practices, and joyful experience of the art of wine and fine spirits. Since being an apprentice in mother’s kitchen as a boy, the art of cooking remains to this day as significant a creative passion as is poetry and music.

To these lifelong pleasures, we would have to add two more: swimming in the sea and traveling to as many foreign lands as possible. Both were inculcated early in his personality—the second might be as existentially central as anything, since from birth onward, life meant constant movement in-and-out of the foreign and the unfamiliar. As a result, his sense of belonging is sharpest when the environment is most strange and wondrous. This too may have been enhanced and refined in the earliest flights into fantasy, the outcome of being immersed in literature as a boy. It’s still pursued vehemently at every chance. A catalyst in this regard were the series of road, rail, and hitch-hiking trips between the ages of 18 and 22, including extensive travel in 1979-80 throughout Eastern Europe, from East Berlin to Odessa, whose highlight was making contact with clandestine networks of dissident musicians. These trips to a lost world are thankfully chronicled in notebooks, early documents of what later animated Stathis’ intellectual world: the entwinement of the poetic with the political.

While this world of friends remained central and precious, and saved the young Gourgouris from the banal contours of college life, the intellectual atmosphere of the university in the midst of LA’s wild cultural existence was experienced with equal passion and commitment. The crazy experimentalism of the band Dudes On Drugs, the legendary parties which were curated and DJed for hundreds of unknown guests, the poetry performances at the Old Venice Jail, etc. took place alongside the association with the Workers Power group and various other solidarity networks of the time and the opportunity to meet the legendary figures who later influenced his intellectual work (Foucault, Derrida, Said, Castoriadis). But all this does not belong to the realm of personal mythology—it’s part of the public record. And there, it's best to let the work (snippets of which are chronicled on this website) speak for itself.